For the Love of Pets Veterinary Hospital

For The Love Of Pets Veterinary Hospital (FTLOP) is a full-service veterinary medical facility located in Grass Valley, CA. The professional and courteous staff at For the Love of Pets Veterinary Hospital seeks to provide the best possible medical, surgical and dental care for their highly-valued patients. We are committed to promoting responsible pet ownership, preventative health care and health-related educational opportunities for our clients. For the Love of Pets strives to offer excellence in veterinary care to Grass Valley, CA and surrounding areas. Please take a moment to contact us today, to learn more about our veterinary practice and to find out more information about how For the Love of Pets Veterinary Hospital can serve the needs of you and your cherished pet. Regular health discussions, photo albums and interesting facts are available on our Facebook page, accessible by clicking on our profile located on our homepage.

Our Mission
FTLOP's goal is to provide unsurpassed veterinary care to our clients and their beloved pets. We embrace the human-animal bond and pledge to treat all of our patients as we would our own animal companions. We promise to compassionately communicate to our clients their pets' veterinary needs and to fulfill those needs. We desire to always exceed expectations. 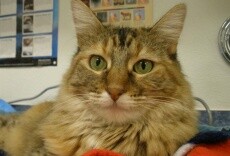 Milo was brought to our clinic injured and later adopted by Celina.

Monster and his littermates were found in Dobbins at 6 weeks old, dumped on the side of the road.

Patch getting his chemotherapy